The Scene – May 25th, BUTTER Melts the Stage at Wonderbar 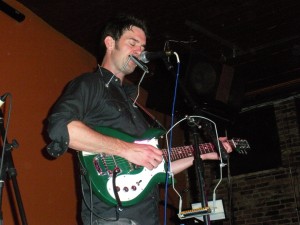 May 25th, Memorial Day, nothing like a full day off work to rest and recover from a long weekend of BBQs and prepare myself a trip to Boston to check out BUTTER’s inaugural show. After a morning of coffee consumption and blogging I hopped on I-95 for the hour plus journey north. Arriving in town a bit early I caught up with some friends for a few hours, and even persuaded one to tag along when I headed to the Allston section of Boston. It had been the better part of a decade since I had visited Wonderbar, luckily I had a fair recollection of its location, I was only a half a block away from its location when I thought I was lost and asked for directions. Tyler and I arrived plenty early, so early in fact we were treated to a bit of sound check while we ordered some quesadillas. I fully enjoyed the organic approach they were using to construct the upcoming sets, distribution of solos as well as set list and order. After they completed sound check I introduced myself and asked if they would mind if I took some video clips. There were to be two bands for the night, the B-3 Kings and BUTTER. 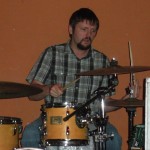 Tom Arey of the B3 Kings and BUTTER 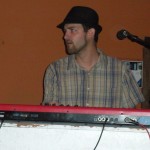 Eli Winderman of the B3 Kings and BUTTER

Both acts seemingly musical side projects, there was little to no information to be found of them leading up to the show, I had to resort to pestering them for information before their show. Hope you guys didn’t mind. The B-3 Kings, comprised of Timo Shanko (also of Special Sauce) on tenor sax, Johnny Trama on guitar, Eli Winderman (also of Dopapod) on Hammond B-3 organ, and Tom Arey on drums, provided a wealth of instrumental funk jazz for the crowd’s auditory enjoyment. BUTTER is G. Love‘s Boston based musical project, and as it turns out was merely the B-3 Kings with G. Love taking center stage on vocals and guitar, and Timo changing from sax to bass. I don’t usually hit out of town shows on work nights, but anticipated this show to be a great one with how much on line promotion G. Love was providing through his Twitter account.

The B3 Kings came out of the gate early with their tight funk jazz fusion (or so I’d call it). The first song of their opening set seemed written to showcase Timo’s versatility on the sax, his fingers, like lightning, traveled up and down the keys on his brass. All four musicians stretched their legs on the first number, so to speak. Tom Arey provided a steady beat for both Johnny Trama and Eli Winderman’s additional solos. So impressive was their song, my new friend Jennifer asked for the band’s name in order to cheer them on, luckily I took out my camera for a chance to record their second number:

Timo, using what must have been a spare set of lungs, whaled on his saxaphone for nearly five minutes before allowing Eli to make the Hammond his personal fiefdom, further justifying the band’s name. During the stretch on the keys Tom laid out some great drum fills and more of the tight steady beats to which I as growing accustomed. It was Johnny’s turn next and he made that semi-hollow howl, traversing the frets as if they were merely suggestions. Timo joined back in on the sax for the remaining minute winding down the jam, and donning his bass. G. Love graced the stage and the band changed to BUTTER:

G. Love used a thumb pick and tore into his funky green Gretsch for some great lead before infusing his emceed blues lyrical flavor, they broke into a new song, “Love Letter.” As with so many of G. Love’s songs it came with a hip shaking rhythm and catchy, singable chorus. G. Love stepped aside halfway through, to allow the crowd a better view while Tom Arey showcased a concise solo on the skins and create further anticipation for his return to the mic wielding his harp, melting every ladies heart in the room. Passing the solo baton to Eli, he took command of the keys and pounded with fervor on his Hammond organ. BUTTER next played “Maxin Relaxin:” 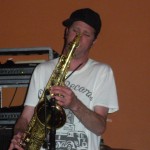 Timo Shanko of The B3 Kings and BUTTER 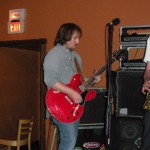 Johnny Trama of The B3 Kings and BUTTER

The song had a vague familiarity to me, admittedly I’ve only re-discovered G. Love’s music as recently as November 2008 with the release of This Warm December, A Brushfire Holiday Vol 1. I’m still unsure if “Maxin Relaxin” has been officially released, I have been unable to locate the song through his online discography, it is possible he played it on April 3rd, at Lupo’s, but it has definitely been released as one of G. Love’s track of the week included in his 1207 blogs at Philadelphonic.com. The song will certainly help solidify further, G. Love’s style moniker of Hip-Hop Blues. Musically, Timo’s bass line and Eli organ work really stood out to me as well Johnny’s solo when G called for him to hit it. I’ll always have a special fondness in my heart for the tone of semi-hollow guitars thanks to John Lennon. They did a great job of getting the crowd into the song and singing along. I’m far from a hip-hop aficionado, actually quite the opposite, but there has got to be something about hip-hop style originating from Philadelphia because as of late G. Love and The Roots have found their way into my musical scope. I was digging the hip-hop flavor when he turned right back around again utilizing quite a bit more blues power for the next piece, “Yonderwall:”

G. Love made his Gretsch sing while Timo bound up and down his bass’s neck with a busy groove. Johnny chopped out a steady rhythm Tom tapped out the clean back beat with impressive fills once again and Eli governed his B-3 with gusto. This being the first show I had a spare battery, for the sake of time and space, I won’t be discussing all the BUTTER songs for which I have no title, if you haven’t had your buttery fill by the end of the write-up feel free to seek out more BUTTER content in my videos section of Myspace. They chose one more song before taking a set break, an autobiographical piece, “G. Love Got Busted:”

Certainly a frustrating situation I’m sure, G. Love still gave the song an upbeat tone and humorous catchy chorus. Everyone got low as Timo took a funky bass solo. It was a great song to end the first set on a high note. During the intermission I took the chance to hit the John and escape the sweltering bar to the alley behind Wonderbar for a cigarette. The band had a similar desire for fresh air and I had the opportunity to meet G. Love and his lady Sarah, who were even more chill and accommodating than you could expect, and continue my conversations with Eli and Timo about their other musical projects and where I could possibly find more info on said acts. Eli introduced me to his friend and band mate from Dopapod, Rob Compa, who additionally plays guitar for another Boston based band, FRIT (opening for The Attic at The Wheelhouse July 2nd). I finished my American Spirit and headed back inside before the B3 Kings started in on their second opening set. Timo started it out billowing through his saxophone a powerfully funky solo:

Johnny blazed the way next with a ferocious guitar solo high on the neck. Eli took to the keys again like a fish to water and tickled out a solo reminiscent to me of Booker T. A great funky number that had the crowd heated back up again quickly. G. Love joined on stage again to form BUTTER, opening the set with another possibly new song “Sugar:”

Another catchy song that prompted audience participation, it started with a chorus, almost to teach the crowd for the refrains to come. This methodology seemed to work as most of the crowd was singing and mouthing the words after the first verse. It had a funky blues feel musically, and staple, G. Love, hip-hop blues vocal styling. Garrett gave Eli a nod, signaling his opportunity to stretch his fingers on the keys once again. Following the next verse they jammed it out a bit, and Tom took a chance at pounding out a quick drum solo. The band then chose a song from G. Love’s and Special Sauce’s last album, Superhero Brother, “Who’s Got the Weed:”

The crowd was further electrified, through familiarity with the song, empathy with the content or just from the righteous funk flowing from the speakers, everyone was shaking their asses. Changing up the jam a bit BUTTER broke into a verse of Peter Tosh’s “Legalize It” before reprising the jam of “Who’s Got the Weed?” to close out the song. I returned to the alley for a cigarette and spoke with some of the bar staff. The bouncers were certainly enjoying the show, and the laid back mentality of the crowd. I returned in time to get a good little clip showcasing Garrett on his harmonica as well, Tom take a bit of an extended drum solo:

It was nice to see Tom show off a bit more, he was really impressive all night, but mostly stuck to fundamentals. Sending the next song out to his girlfriend Sarah, BUTTER broke into “Rabbit:”

An upbeat happy piece, G. Love let loose on the guitar this time around with a great bluesy riff and solo segment. Garrett and Johnny began a hot solo duel that had both sporting ear to ear grins, he then tapped Eli for a few measures of Hammond before the next verse. At the conclusion of “Rabbit” they invited their friend Johnny Walker on stage for a couple of songs. I was switching batteries during their first number with Mr. Walker, Garrett had slung his guitar to the side to and was free handing his harmonica while Mr. Walker was playing a beautiful Gibson flawlessly. They broke into a fantastic cover of Jimi Hendrix’s “Voodoo Child (Slight Return)” next:

BUTTER broke out two more originals to round out their second set, “Hey, Na, Na” and “Get on Back to School:”

Overall it was a fantastic night of music, I would absolutely suggest seeing any of these musicians in any of their projects. I’ve seen a few tweets from @glove about other BUTTER shows in Boston and Long Island, keep your eyes peeled as there isn’t usually a ton of lead time before the show.