Friday September 11th I headed out to Pawtucket to Cat’s at KC’s Tap for a night of music hosted by Zig Zag. The night featured 4 acts I had yet to see, The Big Half, Blackbutton, Zulu Lulu and American Stranger at a venue I’d yet to visit.

I had to work a bit late and took a while to motivate myself to get down to Pawtucket, by the time I made it to KC’s Tap I was just barely in time to catch The Big Half’s last two songs: 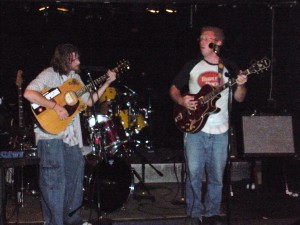 Beau began “Sunshine” on the electric while Zig Zag accompanied on the acoustic. Beau’s lyrics paint a beautiful love song, and the happy up beat tones were certainly catchy. After realizing they had time for another song, Zig Zag took a seat a the drums while they broke into an unrehearsed version of The Beatles “Something.” It was a cute and quirky version of one of my favorite Harrison penned Beatles tunes. I enjoyed what I caught but being their first show together, with only one practice under their belt they weren’t quite tight yet. I look forward to seeing them play out again soon, both interesting and unique songwriters this project has great potential.

Next up was Blackbutton an alternative rock duo from Boston. J.M. Tavenner on guitar and vocals and Anshul Jain on drums proceeded to rock the house, I caught four of their numbers for prosperity: 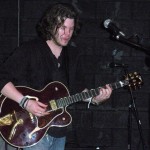 “Red Valerie Ann” had a great bluesy riff and understated drum beats throughout most of the song. J.M. sang with a grungy passion and as Anshul began some furious fills, the guitar was kicked up a notch, rocking the song out towards the end. “Rose’s Roses” was another rocker, J.M impressed me with the slide bluesy opening riff as well as the grunged out sounds during the rest of the song. Anshul was rocking the kit hard for the duration. “Gray” was a slower more melodic and tender number. It helped to showcase a different side of J.M.’s songwriting. Anshul began rocking out the drums again and Blackbutton ripped into “The Physical and Functioning Integrity.” All set they were tight and played with heart to a fairly empty room. They rocked, I loved it and hope to see them play out again soon! 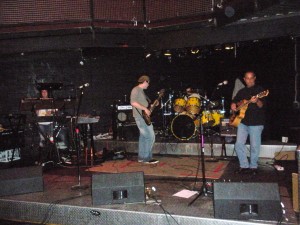 The first number I caught sounded like a combination of 60s surf rock and 80s pop. Ryan’s bass line was groovy and Alan was put out some neat riffs on guitar. The second song I caught had a good walking bass line and good drum back beat. Alan’s vocals definitely hearkened of the 80s as well has Jess’s contribution on the synthesizer. The third song I captured started with heavily on the drums as Jess waved her hands like a sorceress to coax strange tones from the theremin. The tones and pace of the fourth song reminded me again of 80s pop rock sounds with a modern twist. The last song I caught sounded like an up beat marching number. Ryan’s bass line certainly had me tapping my feet and Alan’s guitar chops had me bobbing my head. By the end of the set I was impressed with everyone’s musicality and stage presence and the over all tight cohesive nature of their sound. If you love 80s music, I’d certainly suggest checking out Zulu Lulu.

American Stranger was the final act to the stage for the evening. Kellen Corrigan provided the vocals as well as rhythm guitar, Billy Kerins played lead guitar, Jason Giannetti manned drums and Dave Abady was on bass guitar for the four piece classic/alternative rock band from Massachusetts who played a healthy dose of covers and originals: 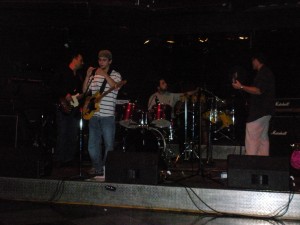 Their cover of The Rolling Stones “Sympathy for the Devil” rocked, Billy blazed on lead guitar and Jason rocked out some incredible fills. Kellen slung his guitar on his shoulder as he introduced the band while Billy joked about the turn out for the show. The next song was an original I believe which Kellen sang passionately, again Jason stood out on drums and Dave’s bass line was busy and progressive. For their next original Billy really shone again on lead while Kellen laid out a good choppy rhythm. The next cover certainly made me smile as they broke out The Beatles’ “Don’t Let Me Down.” Another original followed with a good feel though some of the lyrics were tough to determine. To close the night American Stranger performed a Beatles and Doors medley, Kellen evoking a lot more of Jim Morrison than Paul McCartney in his interpretations. A good set from American Stranger, though I think their performance would have been a little tighter had they performed earlier in the night.

This entry was posted in Live Review, The Scene and tagged American Stranger, Blackbutton, KC's Tap, The Big Half, Zig Zag, Zulu Lulu. Bookmark the permalink.