Saturday September 5th I woke surprisingly early, especially after arriving back from Ricky’s surprise show so late. Wiping the slumber from my eyes I posted the first installment of Local Flavors and headed out to Providence for breakfast with m’lady and a furious day of promotion. Arriving on Thayer Street at about Noon I canvased the area talking about local music and handing out fliers. After about 5 hours Zach Fenner joined me with an acoustic to make the remainder of the promo time fly by. Thanks Zach!

After Zach joined and we enjoyed a few hours of fliering and serenading passers by, I decided I needed some caffeine and after securing a large iced, we made our way to The Spot to leave a few fliers. The door was locked, but we heard some guitar coming from inside and gave a knock. Steve was nice enough to let us in and leave some fliers, and asked Zach to jam for a bit:

The first jam I caught was rooted in the blues, Steve was using some really cool effects on his bass to give it almost a lead guitar feel. Zach tore up a few measures on his acoustic, the first I’d seen him play. It was a great opportunity to relax and take a load off after a long day of promotion (read: whoring myself out up and down Thayer). I sat back and enjoyed my coffee for a bit, after a few more minutes of jamming Steve wanted to try something new, and Zach bellied up to the drums. Slinging a second bass over his shoulder he began to dual wield. Starting out with a walking bass line on the bottom guitar he quickly began fleet fret work high on the neck using the lead effect (I’ll call it for lack of a technical term) on the chest level base. I thought the dueling basses was pretty bad-ass. After a quick third jam, I put the camera away and went back to enjoying my coffee on the couches. We stayed probably about 30 minutes or so before taking off back up, down and around Thayer handing out some more fliers. Zach gave me a ride back to my car and I retreated to Cranston, still on the fence as to whether or not I’d make it out to Pawtucket later that night. I don’t even think I had my Birks off before I conched out on my bed for a few hours. I awoke with time to spare, and made my way to the Blackstone. 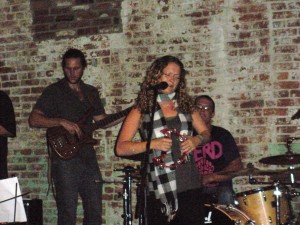 Opening with a funky instrumental cover of The Meters’ “Sissy Strut,” The Chelsy Lau Band set the mood and got the crowd swaying. Taylor Munson laid out the bass line, Russ Miller tapped out the back line on the drums, Pat Condon set the groove on guitar, Andy Larsen played a smooth saxophone and Christyn Brown belted out the trombone. Chelsy hung back dancing and using a shaker on the opening instrumental, letting the band take center stage before taking the mic for their second number “Ophelia,” a The Band cover. Chelsy wailed her soulfully funky vocals making full use of the stage while the band rocked out with Pat lending great backing vocals on the second verse. Playing an original next, Chelsy took to the piano for a rendition of “Literary Man,” off their last release “No Genre.” Russ began the lead-in on the kit while Chelsy introduced the song. Taylor and Pat both joined with funky riffs while Chelsy began at the piano with almost a classical sound. Andy set down the brass and began playing a violin in compliment to the piano tones. I went to the bar for a beer and out to the back deck for a quick cigarette and returned to catch them playing the funk again, with their original “Boom.” Chelsy belted it out while swaying to the beat. It was heavily flavored in the funk to start and rocked out towards the end, keep an eye out for Russ’s crazy fills. The horns came in strong on their last number, titled “Pretty Good.” Chelsy impressed on the mic once again, Pat tore into a great melodic solo halfway through and Taylor’s bass line had me bopping in my seat. It was a great high energy number, setting the tone for the night. Since this show, The Chelsy Lau Band with the addition of the horn section has spawned a totally new project named Sauce who have a great show coming up November 28th at Jerky’s you should check out!

VulGarrity, a multi-instrumental, brother and sister, rock duo was next to play. Tracy and Shawn Garrity took to the stage to rock the house: 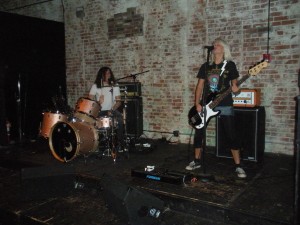 Shawn began by laying out a guitar loop before donning the sticks the slamming the drums and providing lead vocals. Tracy rocked out the bass line and sang backing vocals. Rocking hard they showed off some great harmonies. Playing “Idiots in Photos” next the format on stage was the same. Shawn looped two guitar tracks at the drums while Tracy introduced the song. Tracey was impressive on the bass and harmonies while Shawn pounded on the kit. As VulGarrity continued to rock I made a quick trip to the bar, then out back to the smoker’s porch. I continued to enjoy their rocking set from afar as I finished my butt, beer and conversations. When I’d returned to the stage area, they had changed the stage formula around, Shawn had slung the bass on his shoulder and Tracey had taken the helm at the drums for the song “No Coins.” Shawn played the bass like a lead guitar and provided the vocals. Tracey provided a great back beat and fills while lending backing vocals. It was a fabulous set, and I was very intrigued, both musicians were great on all the instruments they played, and it was the first I’d seen a form of, what I call, live production in a band. I’ve seen it used by solo singer-songwriters much more frequently. Coming early December there are three chances to catch VulGarrity live, the 3rd at Fusion 5 in Foxboro, the 4th at The Blackstone in Pawtucket, or the 5th at The New Wave Cafe in New Bedford.

As the night wore on I began to feel exhausted from the long day of promotion scouring the Providence streets and knew I wasn’t going to be able to last the remainder of the night. The crowd was lively by the time SEXCoffee hit the stage for their CD release party. I mustered the energy to stay for the first couple of songs: 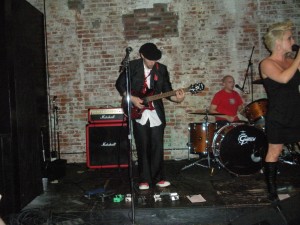 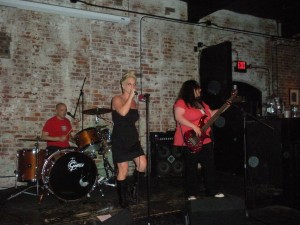 SEXCoffee started the set with “Moocher” from 2007’s “The Drink You Paid For.”  Sharlene started out the number with a hard thumping, walking bass line before Rick tore in on guitar and Paul started to pound the kit. Ruth began to belt out the vocals while patrolling the stage, solidifying her stage presence. Rick had a fantastic lead segment on guitar, melodic at points with great use of feedback. Changing the tone to a more reggae feel, they continued with “Du Bist Ein Schlumpf “ also from their 2007 release. As the song sped up the crowd was rocking along. Rick provided steady heavy drum beats while Sharlene was bounding up and down the neck. The final song for which I stayed was “Tasty,” from their new EP, “The Morning After.”  Ruth again delivered with power and passion, Rick blazed on guitar while Sharlene slapped the bass with conviction and Paul knocked the covers off the skins. It was a high energy beginning to a set and I can only imagine it went on to rock even harder as the night progressed. I made my way out during the next number, making sure to snag a copy of “The Morning After” before I left. December 5th SEXCoffee will be back at the Blackstone to rock your socks.

This entry was posted in CD Release, Live Review, The Scene and tagged Local Flavors, SEXCoffee, The Blackstone, The Chelsy Lau Band, VulGarrity. Bookmark the permalink.