An appetizer picked from the local sampling of musical acts in the area. Tastes of hip hop, reggae, rock, jam, jazz, country, funk, blues, psychedelic, and folk are represented to satiate the widest variety of music loving palates. Download available for comfortable in home listening, and designed to fit on an 80 minute CD to take with you to go, and share with friends!  Download available after the jump! 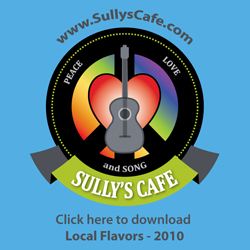